Chances are if you have ever listened to any strand of early 2000s emo music you probably know all the words to “Hands Down.” Fronted by Chris Carraba, Dashboard Confessional are more acoustic rock with influences ranging from Bruce Springsteen to Weezer. They were a pretty popular band back in the 2000s, releasing their last full length in 2009. Since then, they have fallen under the radar with the exception of an EP in 2010. Dashboard Confessional just wrapped up a summer tour with The All-American Rejects, The Maine and The Social Animals.

My first thought was that these bands were all very strong alone, but together it seemed like a really odd lineup. So, I went to the show in Philadelphia at Festival Pier. The Social Animals were the only band I did not necessarily know about before the concert. I looked them up, but honestly their recorded music does not give them any justice. They are very indie and laid-back, but were still very captivating as an opening act. Typically, the majority of people talk during opening acts, however, The Social Animals had a nice stage presence, so even if you were not familiar with their music, they were still fun to watch.

After, The Maine came on stage. They are a typical pop punk band with very upbeat music. They played songs from their older album Can’t Stop Won’t Stop to their newest release, Lovely Little Lonely. I thought they had a good stage presence and I was really impressed by the way John Callaghan was able to interact with the crowd. He talked directly with people who were not showing excitement and kept asking them to “let loose and dance.” People like Callaghan are some of my favorite people to watch on stage because you can really tell they enjoy it. 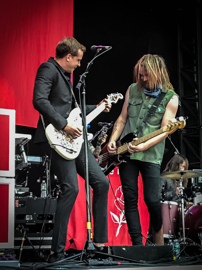 The All-American Rejects were similar in the way that Tyson Ritter would make jokes and comments the whole night. They opened their set with “Dirty Little Secret,” which is the staple of every 2000s movie. They included songs from as early as 2002 to their most current releases “Sweat” and “Close Your Eyes.” As much as I liked their more upbeat songs, the atmosphere during “Mona Lisa” showed a different, softer side of the band which they normally are not associated with.

The most interesting part about this concert had to be the fact that I immediately knew who was there for each band. The majority of teens to early twenties wanted to watch The Maine, and anyone older was probably there for the All-American Rejects, even though they were not the headliner. It seemed only a handful of people were actually there for Dashboard Confessional, which I thought was pretty weird since they were the headliner and are a really crowd-orientated band as well. They had a more acoustic and soft rock vibe, but the crowd wanted someone to keep them active and dancing throughout the whole concert. However, I thought it was perfect. By the time the All-American Rejects wrapped up their set, Dashboard Confessional was there to balance everything out. They sang all of their classic songs like “Screaming Infidelities,” “Vindicated” and “Hands Down.” I was really surprised when they covered “Today,” The Smashing Pumpkins classic. I was taken aback by how good it sounded, especially since I prepared myself for the worst. I normally am not a fan of covers, but I have to say this one impressed me.

Chris Carraba teased a new song and talked a lot about how they have been working on new music and hope to release it very soon. They sang a new song which felt very close to their roots. It had an acoustic vibe, but with a typical Dashboard Confessional fashion. Recently, the band has released an EP, covering Justin Bieber and The 1975, and Chris Carabba also features on “Hopes Up” by nothing,nowhere., an emo and hip-hop fusion artist.